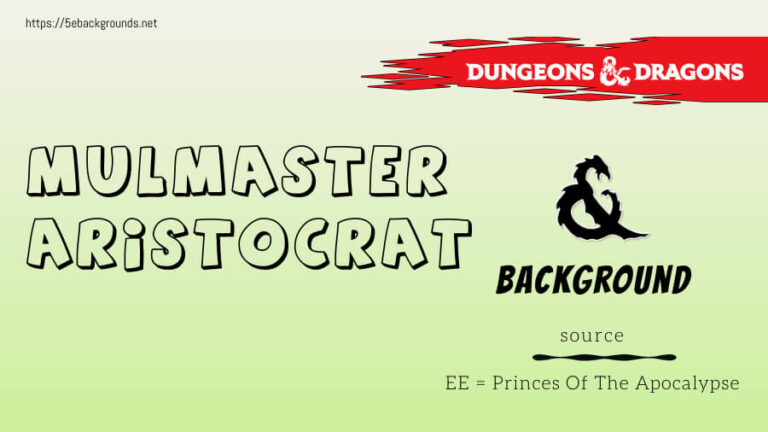 Born in the family of one of the wealthiest people in Mulmaster, the city of danger’s aristocracy, you have spent your life looking down on the indigenous people of the city from your sky-high palace. Well-dressed in robes made of fur, you spend your time practicing art.

Although your family might not be part of the council of blades, you are still entitled to the elite class of Mulmaster. Even though you are not even a Zora or a Zor or personally have a high place in the aristocracy, you still tend to be in the great halls, where the elites of the aristocracy members come to be seen and keep an eye on others, while making trade, plan strategies makes schemes discuss various arts and activities of the sort.

What is a Mulmaster Aristocrat in DND?

The Mulmaster Aristocrats are the wealthiest and the most powerful people in the city. You live in big palaces on high grounds where you can see far into the city and observe the life of the common people. Being part of the city of dangers’ aristocracy, you possess a lot of power and wealth.

Born in the highest class, most of the other classes in Mulmaster defer to you. You hold a great influence and power and that is why even the soldiers, the hawks, cloaks, and priests defer to you as most of the Mulmaster is known for its aristocracy. But naturally, you fit right in with people in your class be it the nobles or the other aristocrats. These connections come in handy for you when you want to get your message to the Zor or the Zora.

This feature is a variant of the Noble 5e.

Why Use the Mulmaster Aristocrat Background?

Enjoying power and influence is a dream for many of us and being an aristocrat in the city of Mulmaster Aristocrat is like a dream come true. These people run the city, they make trades, they come up with schemes, and enjoy quality time with other people in their class. Although a lot of people don’t like you, they still have to respect you for who you are.