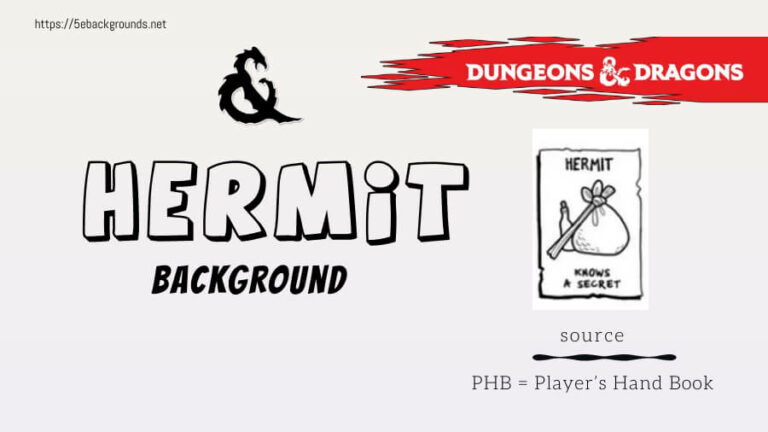 Hermits unlike any other 5e backgrounds like Entertainer, Folk Hero, or Guild Artisan who has to surround themselves with people chose to live a life of solitariness. They are the ones who choose to live their lives in isolation. Their isolation could be with a sheltered community or they isolate themselves without any other peers.

The reason for the seclusion of a hermit could be anything; it could be enlightenment or you are forcefully exiled from your town, it could be that a hermit is looking for serenity or it could be an answer they might get in complete solitude.

Skill Proficiencies: Skill proficiencies of a Hermit include Religion and Medicine.

Tool Proficiencies: You are proficient with Herbalism Kit.

Languages: One of your choice.

Equipment: A scroll case in which you have your notes or prayers, a winter blanket, a set of common clothes, an herbalism kit.

Isolation of a Hermit

A hermit chose to live his formative stage of life incomplete or partial isolation. But the question is what motivates a hermit to live a life of isolation and what motives are behind it when he ends the solitude phase of his life. To determine this work with your DM or look through the table to decide which reason suits your hermit.

In your isolation, you might have discovered some unseen place or dug out some relic, or you get something that will help you take revenge from the enemies that forced you to live a life of exile. Ultimately, your reason for your discovery can be determined with the help of your DM and it will have an influence on your campaign.

Because Hermits go into seclusion and there must be the reason behind his isolation from the people/community. People might confuse hermit with other backgrounds like Acolyte, Outlander, and Charlatan. You can play an Acolyte rather than play Hermit who has given up the materialistic world and has become more religious and pious or you can play the background of an outlander if you are living off the land in the company of people who shares the same wilderness as you and you can also play a Charlatan who has disguised into an acolyte and makes naïve people follow him.

Why roleplay a Hermit Background?

Isolation is the reason that makes a Hermit background 5e more interesting for a role play, their isolation has a reason which makes it more worthwhile. A hermit does not isolate himself without reason, and there are multiple reasons for a hermit’s isolation.

The isolation of the hermit does not go in vain; he finds what he was looking for which makes a hermit a sort of a character that sounds mysterious to most of the audience. He might have got a power that makes people afraid of him or his isolation motives him to discover something that is ancient.