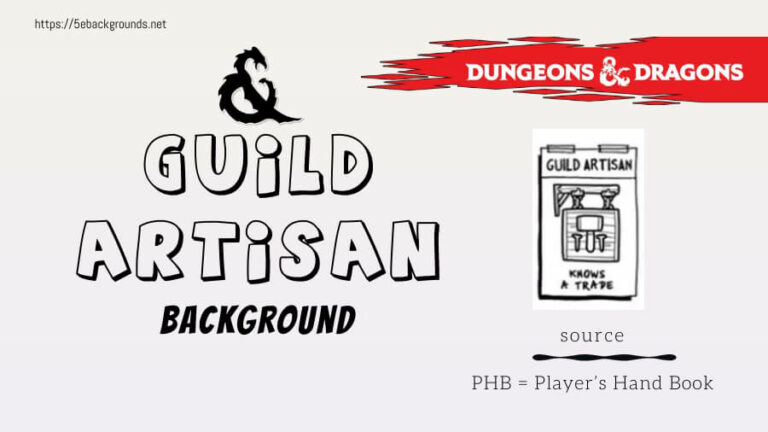 Guild Artisan 5e in DND is a person who is skillful and master in a specific type of artistic work. Artisans are not alone and don’t work independently. They have from a Guild of their own and the guild shelters many types of artisans. A guild is like a community that supports and helps of their own type.

Skill proficiencies: As an artisan, your skills are insight and persuasion.

Tool proficiencies: You are skillful in any one type of artisan’s tool.

Languages: One of your choice.

Equipment: Not only an Artisan tool but also an Artisan must have a letter of introduction from your guild, a set of traveler’s clothes, and a belt pouch of 15 GP.

Either your guild is working in a city in close connection with each other (artisans in the guild be sharing the same trade) or artisans could be working in a loose connection in a much larger area. The business that the Guild will carry out will be decided either by working with the DM or by selecting from guild business. It is like a selection of Criminal specialties.

You will enjoy all the benefits that a member of a guild enjoys; like lodging, food, and getting paid for your funeral as well.

Guildhalls in different towns will provide you the opportunities of meeting with people who share your profession, maybe you can find hirelings and allies as well.

As we know that as an artisan you are not alone your guild will support you in your difficult times and will support you if you are accused of a crime if your crime is justifiable. In addition to it through your guild, you can rise as a powerful political figure and this does not come in handy, you have to donate money or a magic item.

You are a common person in the world but there might be circumstances where you decide to go on an adventure. You are hardworking and passionate about your work but as a being, you are also subjected to sins and wrongdoings.

What is Guild Merchant?

A Guild merchant is one who does not do artistic work of his own rather he deals in the work of the others, he sells and trades either with the things formed by an artisan or just raw material. You are also part of a guild but your guild is quite a different guild. Your transportation of goods is carried out by different means of transports and your life is much adventurous than the life of a typical artisan. As a guild merchant, you are proficient with the navigating tools rather than artisans’ tools.

Why roleplay a Guild Artisan background?

Definitely, for those who love to work as a craft man, roleplaying an artisan is their type of thing. Unlike Acolyte, Charlatan, or any other 5e backgrounds. You have a community of your own that stands for you on your rainy days. And in addition to it, you get to enjoy the benefits of a guildhall. With the undaunted support of your guild, you can get a chance of becoming a political figure.

And if you want to spice things up and want some adventure; you could be a Guild Merchant. You will sell goods crafted by other artisans and transport them from city to city and in either case (as an artisan or as a Merchant) you are always supported by your respective guilds.