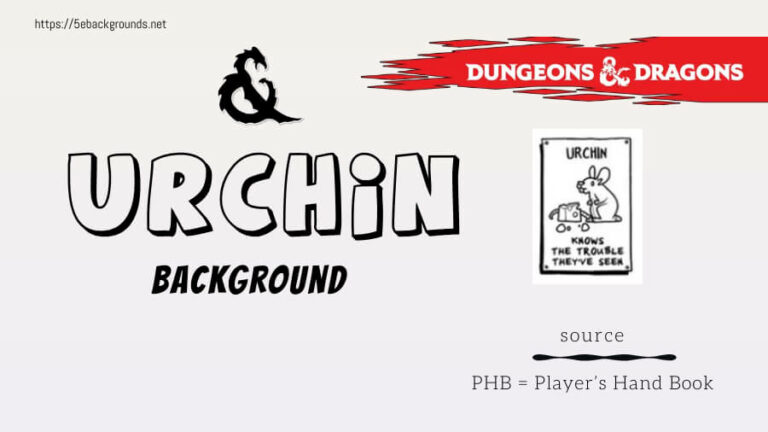 Dungeons and Dragons is a tabletop game and when it comes to d&d 5e background, it represents pretty much every actor in society. From those who abide by the law of God Acolyte. To those who are not considered to be the law-abiding individual of society Criminals. From those who give up society just for a cause Hermit and who are expert survivalists Outlander, As far as background is concerned, DnD has enshrined all under its heading.

What is an urchin DnD?

Like many other dnd backgrounds, Urchins are the one who lives their life on their own. As an urchin 5e, you grew up orphaned, poor and no one was there to look after you. Everything that you learned by yourself.

You thrive for food and made sure that no one takes it from you. You suffered from aliments all by yourself. There was no medicine which you can take to mitigate your fever. All these odds play in your favor and made you fierce, agile, and smart.

But now embark upon your adventuring journey and the money for your adventure is something that you saved for and now have been living a modest life.

You grew up in the streets, you have spent your life from childhood to your adulthood in the city and you’re aware of every inch of the city. You know the ways and secret passages and patterns within the boundaries of the city and outside its boundaries. With your friends along your side, you can travel in the city as fast as lightning.

Why roleplay an Urchin 5e?

Urchin’s background is interesting in the sense that you start from very scratch and you grew in the streets fight for yourself and thriving for a basic thing, so, adventure is always there and you will surely not feel boring while playing such a background. Everything that you learn is self-taught and you did not rely on people to do a thing for you, so, you are kind of a person who lives and acts out of his own will and not by being stimulated by someone.