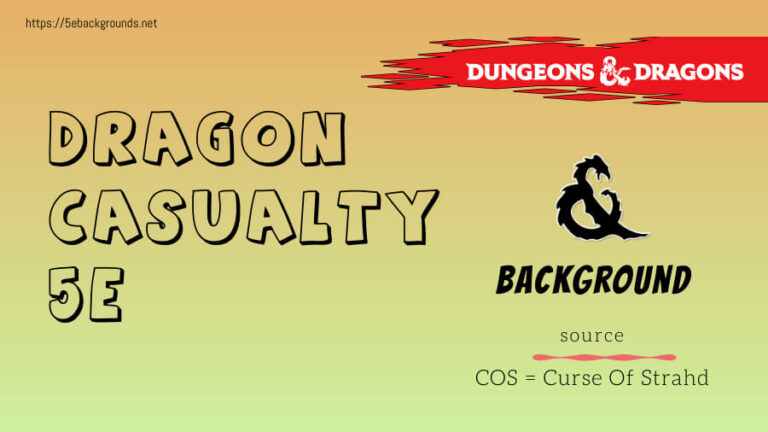 When the fierce dragon unleashed its fury on Phlan and wreaked havoc on everyone and anyone who stood in the way, you were one of the unlucky ones. Many of your fellows lost their lives under the deadly claws of the dragon as it lynched them piece by piece, but you were met by a fate far worse than death.

The green dragon has made you into its little plaything with no emotion and if anyone knows the reason why your life has been spared, it’s the dragon itself. But you consider yourself to be the most unlucky as you have been nothing but a mere magical experiment for the brutal dragon. You have to spend the rest of your life being a disfigured fella, pitied upon by others and doomed for the rest of your life.

What is a Dragon Casualty in DND?

Many have fallen prey to the atrocities and wrath of Vorgansharax as it has killed your family and your friends. Many have died by the deadly claws of the dragon but few who have managed to survive are trapped away and forced to live a life way worse than death.

You are one of these unlucky ones as your life has been spared, just to be part of a terrible experiment by the dragon. It has left you disfigured by all the torture you have been through all these years in captivity. You have to carry those scars with you now, for the rest of your pitiful life.

Pick one of the following occupations that you had before you were actually going through the epic tragedy and torture by the Maimed Virulence. Your occupation also defines your tool proficiency, so be careful while picking one.

Your time under constant torture might have disfigured you somehow and you can choose one of the following to further define your characters’ appearance and only appearance.

Your days in captivity, under the brutal torture by the dragon have certainly left a huge impact on you both mentally and physically. It can be seen by the scars that you carry around, but for those who know about your ordeal, it is considered to be a very noble thing and they want to listen to your tale. It has made you quite a known person around and people respect you for what you have been through.

People want to listen to your story and they are curious to know any of the secrets that you might possess about the Maimed Virulence and so you are granted access to the places that you otherwise would not have. Your scars and the way your body might have been disfigured totally scare some people out and give you an intimidating personality. However, the reason behind your life was spared still haunts you and makes you suspicious of the ulterior motives.

Note: The feature is inspired by the Far Traveler background.

Why Use Dragon Casualty Background?

Dragon Casualty is a fascinating background with an even more captivating story. A common citizen of Phlan, taken away and tortured by a fierce beast. This background lets you play around with how the character actually appears because of the torture that he has been through and how his body might have been disfigured in.