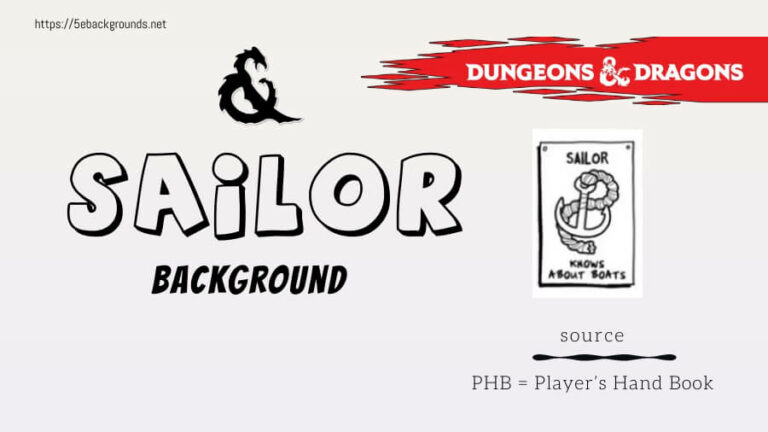 As a sailor background, you have served on a ship for many years, and while you were on your voyage, the ship on which you were sailing faced many hurdles like deep-sea monsters, and fierce storms to sink your ship down to the bottom of the deep dark sea. Your motive was to reach the horizon, but unexpected twists and turns made paved your way for a new adventure.

Attributes of ships also include the status of the ship itself; like how renowned your ship was? How widely has your ship traveled? Have your shipped been on any voyage? Or is your ship missing or just rumors have been spread about it being a missing ship?

Also, you have to determine by discussing with your DM your own status on the ship on which you were sailing.

Were you a cook? Cook? Or some other job you were doing. Who were you, captain? Or who were you bosom buddy on board? How did you leave your ship? it is also to be discussed with your DM.

You can get a ship for you and for your companion who accompanies you on an adventure. Either the ship could be a ship on which you have previously sailed on or it could be a ship with whose crew you have a good relationship.

When talking of ships; how can one forget about the key characteristics of the sea (PIRATE).

In dnd Sailor background 5e, you have served under the ruthless and dread pirate. Under his guidance, you have learned to survive in a world that is full of sharks and savages. You are not afraid of bloodshed and you are known in many ports and towns for your unsavory reputation.

If you choose to role-play the dnd background of a Pirate then SHIP’s PASSAGE might not suit you as a feature rather you can go for a different feature.

There is no doubt that you are a badass. People dread you because of your reputation and they are not willing to report you for your minor offense; like you might not pay for the food, you have just eaten or you knock on the door of the shops.

Why roleplay a Sailor’s Background?

For the love of voyage and sea, one might go for sailor background. You get to see the different places and in addition to it, you get a chance to build a relationship with people on board and off-board. Adventure is something that will always be a part of your and in addition to that, you get to decide every little detail of your ship, its journey, and your status on the ship.

And if you choose to go for the Pirate background you will be known in many towns for your reputation and for your ruthlessness and savageness.